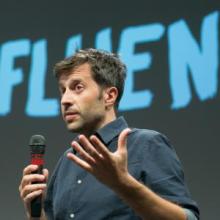 Bani Brusadin is a curator, educator and researcher. Since the late 1990s he has been researching contemporary art, critical technologies, user cultures, grassroots politics, and the utopias and dystopias of a networked society.

He founded and co-curated ""The Influencers", a festival about unconventional art, guerrilla communication and radical entertainment (2004 - 2019) co-produced by the CCCB Center of Contemporary Culture of Barcelona and supported by the City of Barcelona, the Catalonia Regional Council and the Creative Europe program. Fifteen editions of the festival have taken place so far, spanning over very different moments in the history of digital and post-digital cultures, and hosting some of the most relevant emerging artists, radical designers, rebel technologists, unusual activists, and independent researchers on the international scene. Since 2018 he is one of the curators of the "Tentacular" festival, promoted by the Matadero art center in Madrid. Bani is currently working on "Freeport", an independent study program about creative / critical strategies for a world of humans, non-humans and machines, in collaboration with Matadero Madrid and other organizations.

Bani Brusadin holds a PhD in art production (University of Barcelona, 2016) and currently teaches about network cultures at the University of Barcelona, as well as in postgraduate programs at Esdi (Curatorship in Digital Art), the University of Barcelona (Technopolitics) and Elisava (Data & Design). In 2018 he co-chaired the international academic congress Interface Politics - After Post Truth, organized by BAU Design College Barcelona in collaboration with Hangar and the Museum of Contemporary Art of Barcelona. He is guest co-editor of the next annual issue of Elisava Design School's Temes de Disseny research journal, due in Spring 2021, devoted to "invisible conflicts and the new terrain of bodies, infrastructures and information".